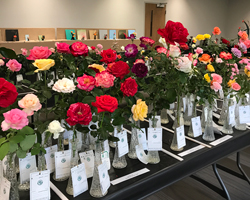 The Nashville Rose Society held its annual 2017 Fall Rose Show on October 7 and 8 at Belmont University in Nashville, Tennessee. Over 30 of the most accomplished exhibiting rosarians from across Tennessee, Kentucky and Alabama competed for awards in multiple categories – from hybrid teas, floribundas and miniatures to climbers, shrub roses and old garden roses – displaying hundreds of roses in a variety of colors and fragrances. There was also a competition for best rose arrangement.

The Royal Court for the show was: